For the first time in the four years since I had been collecting hitchhiker messages, a cop pulls up to me.  He is of the renowned CHP, or ChiPs–the California Highway Patrol.  This is on the closest Route 99-North on ramp to the south of Fresno.  I was parked on what must have been Clovis Avenue, near the freeway underpass and safely and legally well onto the shoulder.  After checking for graffiti on the back of the Freeway Entrance sign, I proceed farther down the on ramp to the weather-beaten wooden post on which the “Pedestrians, Bicycles, Motor-Driven Cycles Prohibited” sign is bolted.  While marching these twenty-odd yards, in the corner of my eye I catch a glimpse of a highway patrol car turning onto the ramp.  Trying to ignore it, I continue on about my business, secure in the knowledge that I an violating no law; although equally aware that what I am doing is undeniably out of the ordinary.  Almost to the sign, I am not at all surprised to see the black-and-white pull alongside me.  Through the open passenger-side window the officer, tucking into an almost fetal position, leans over and calls out to me.

With a somewhat confused look on his face and a tone in his voice to match, he asks me what I'm doing.  Considering this query quite reasonable under the circumstances, pointing with my right hand to the logbook clasped in my left, I explain my purpose:  to look on road signs and light poles at freeway on ramps and interchanges for the messages hitchhikers write while waiting for rides.  Although the perplexed look on the face of this 45-ish road warrior remains, his facial expression, framed by a silvery-brown close-cropped haircut, tempers somewhat from one of tense suspicion to that of cautious curiosity.

"So, whatta they write, ‘Bob was here’ or something?" he retorted somewhat mockingly.  I chuckle back at him in an I-know-you're-busting-my-chops-and-I-can-take-a-good-natured-ribbing-with-the-best-of-them tone, and follow immediately with, “Yeah, there are those.  And sometimes it's bathroom graffiti kinda crap.  But, sometimes there’s also philosophical, soul-searching stuff.  And religious and spiritual.  Poems, too.”  Sensing his demeanor softening even more, I continue, “Ya’ know, standing out on the side of the road for hours at a time, getting passed up by strangers one after another, leads some people to question their circumstances and others to take stock of their lives."

"Hmmm, that's interesting.  I never knew that!"  This time his reply comes with serving of surprise and a side of contemplation in his voice, as if confessing that, in all those years he has been patrolling up and down the roads and, when he has heretofore thought he’s heard and seen it all, this is a whole spanking brand new one on him.

“Most people don't,” I proclaim, feeling now like this is turning into more of a conversation than interrogation.  With that, as I am apt to do, I went on to expound,  “In fact, most hitchhikers don't even realize it.  I discovered it back in the Seventies when I did my share of hitchhiking, so I know where a hitchhiker is likely to stand--and wait.  I've been going around the southwest over the past few years writing these messages down.  Maybe I’ll write a book about it or something, I don’t know."

With the sound of a man who had just been enlightened, and as our eye contact is now transformed from one that was potentially adversarial to just two guys going on about a common interest, he confesses with almost a bit of a chuckle, "I'll have to check that out sometime!"

"Matter of fact," I volunteer, "I'm on vacation, now.  My family’s back at a motel in Visalia, probably still asleep.  I don't like to take them along when I do this, though.  Too dangerous."  To which he responds with police benevolence, "Yeah!  You be careful.  It can be pretty dangerous out on the roadsides."  I nodded in agreement, letting him know that safety is a priority for me, but that such risks are not going to stop me.  As I make this decree, an 18-wheeler wide-left-turns its way onto the ramp, using all of the road and a bit of the shoulder as it does.  Noticing that the driver-side rear end of his cruiser is protruding a little too far into the traffic lane for his own good, I continue, “You're in kind of a dangerous spot, yourself!"  Whipping his head and twisting his torso around towards the menacing mass bearing down on him, and then turning back to me, he rapid-fires, "Hey, you're right!"  With that, he stomps on the gas pedal to bolt out ahead of the semi and, with a short, one-stroke, over-and-out wave goodbye, he takes off up the ramp and into freeway traffic to protect and defend.

Waving back, I smile to myself over this exchange that has ended as abruptly as it began.  As the cop had just continued on his, I too go about my own mission.  It just so happens that the entries I log at this site are quite similar to and as diverse as the types of notations I have just told the cop might be written by hitchhikers.  So, while transcribing them, I hope he would take the time to stop here sometime to, as he said, check them out.

Since it is just about getting to be wake-up time back at the motel, I figure I should begin working my way back south to Visalia and back into family life.  Two on-ramps down, in the Central Valley town of Selma, as I stand facing the light pole, logbook in hand, again comes a CHP patrol car.  This time instead of trying to ignore it, I glance up and look through the windshield.  Noticing the same cop I talked to only minutes earlier, and seeing that he sees it is me again, legitimately pursuing the unorthodox avocation I claimed I have been pursuing on his beat and on his watch, we again raise a hand to each other in a simultaneous acknowledgment of mutual respect.

On the "Pedestrians...Prohibited" sign affixed to that wooden post while talking to the highway patrolman, come the following messages that just so happen to pretty much encapsulate my claims about them to him:

[Drawing of a grave stone with RIP in it and long arrows angling down]
METALLICA
Who made you God to say,
to take my life from me,
Flash before my eyes
Now it's time to die
[lyrics from Ride the Lightning, Metallica, 1984]

Love is all that is
REAL
The rest is illusion

Who wrote this shit?!﻿ 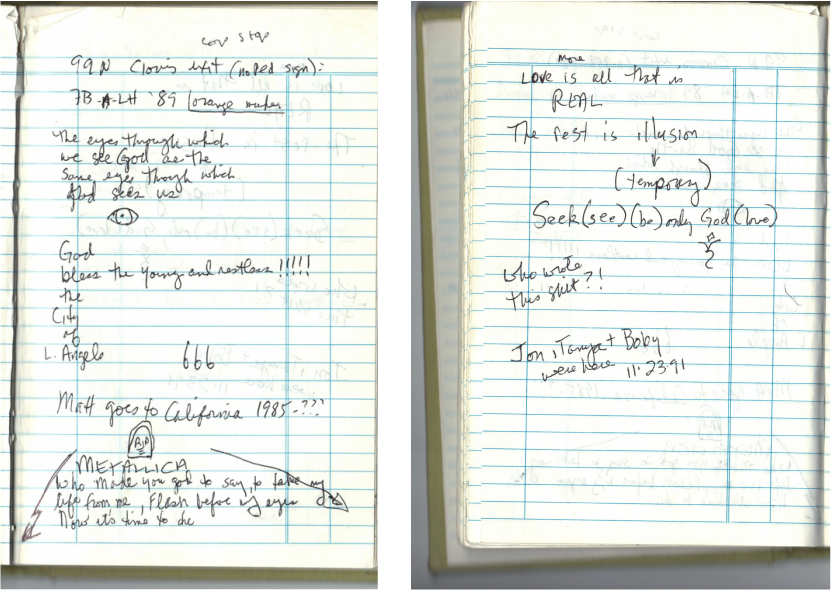