On Highways and the Airways

With all these Hermes-Mercury-highwayman-traveler connections and the dangers on and spirits of the road as a backdrop, there comes the story of The Hitchhiker.  A radio play first performed and aired in 1941 by the Mercury Theater Players, this is a haunting tale of one man’s cross-country automobile journey and the hitchhiker he passes by again and again and again-- tormenting him and testing his sanity on the way.  Written by Lucille Fletcher, the play was reworked for various venues over the years--including a version shown during the first season of the Twilight Zone television series almost two decades later.

Fletcher’s radio play begins on Route 66 just west of Gallup, New Mexico, in an auto camp--the precursor to the modern-day motel, or a “proto-motor-hotel.”  We hear the main character, Ronald Adams, in an attempt to maintain his calm, saying to himself:

﻿I'm thirty-six years of age, unmarried, tall, dark with a black moustache.  I drive a 1940 Ford V8, license number 6V7989.  I was born in Brooklyn.  All this I know. I know I'm at this moment perfectly sane, that it is not me that's me that's gone mad, but something else, something utterly beyond my control.  But I must speak quickly.  At any moment the link with life may break.  This may be the last thing I ever tell on earth - the last night I ever see the stars.  Six days ago I left Brooklyn to drive to California.

﻿ Ronald’s train of thought is interrupted; the scene segueing to a rainy morning in Brooklyn six days earlier.  His mother, in a tearful good-bye, is wishing him good luck on his journey west and expressing to him her worry about his driving such a distance alone.  The dialogue between them concludes with:﻿

Ronald:  Oh, Mother. There you go again.  People do it every day.

Mrs. Adams:  I know.  But you'll be careful won't you?  Promise me you'll be extra careful. Don't fall asleep or drive fast or pick up any strangers on the road.

Ronald:  Strangers!  Don't you worry, there isn't anything going to happen.  It's just eight days of perfectly simple driving on smooth, decent, civilized roads with a hot dog or a hamburger stand every ten miles.

﻿[Author's Note:  I must point out here that, although written before the onset of World War II, during the waning days of the Great Depression when hobos and tramps were still flush upon and crisscrossing the American landscape, here we find a mother admonishing her adult son about the dangers of the road and to not pick up hitchhikers!  This was supposedly back in some of the same “innocent” and “good old” days when it was--ahem–so much safer out there.]﻿
﻿The radio play then goes on to chronicle Ronald’s road trip, starting at the Brooklyn Bridge, on which he first encounters and passes by the image of a hitchhiker in the rain.   After six days and many more times passing this very same hitchhiker trying to flag him down as he state-line-by-state-line crosses the country, Adams feels he is going crazy and grapples to get to a gas station pay phone to call home in an attempt to emotionally right himself by talking to his mother.  But when a strange woman answers the phone and informs him that Mrs. Adams is in the hospital due to a nervous breakdown caused by the death of her son, Ronald, six days before in a car crash on the Brooklyn Bridge, Ronald realizes that this ubiquitous hitchhiker he had been passing time and again must be a spirit of some kind trying to flag him down to go with him on a ride to the “other side.”

The story ends in the same place and time as it began.  Here we hear Ronald Adams complete the deep, desperate, introspective monologue that the play opens with:﻿

﻿And so I'm sitting here in this deserted auto camp in Gallup, New Mexico.  And so, I'm trying to think.  I'm trying to get a hold of myself.  Otherwise...otherwise, I'll go crazy.  Outside it is night.  The vast, soulless night of New Mexico.  A million stars are in the sky.  Ahead of me stretch a thousand miles of empty mesa and mountains, prairies, desert.  Somewhere among them, (the hitchhiker) is waiting for me--somewhere.  Somewhere I shall know who he is and who I am.﻿

If ya give this man a ride
Sweet memory will die
Killer on the road, yeah
--Riders On The Storm, LA Woman, © 1971 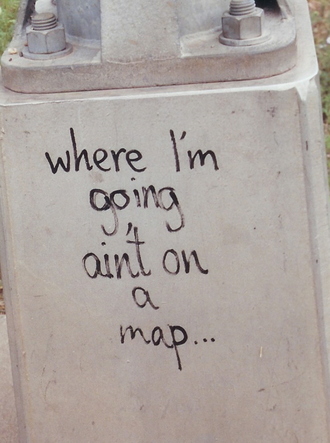 It seems curious that these words, written to be spoken by a man named Adams for a theater production company called Mercury, concerns a traveler, a hitchhiker, and a galaxy of stars.  It would be about a decade after this script was penned, that another man by the name of Adams--Douglas Adams--would be born to one day write his own stories about a guide to hitchhiking the galaxy.

I fly a starship across the Universe divide
And when I reach the other side
I'll find a place to rest my spirit if I can
Perhaps I may become a highwayman again
Or I may simply be a single drop of rain
But I will remain
And I'll be back again, and again and again and again and again...
–Highwayman, El Mirage, Jimmy Webb, 1977 © Seventh Son Music

In 1974, thirty-three years after the first broadcast by the Mercury Theater cast of The Hitchhiker, I, at 18 and half the age of the fictitious Ronald, but like him also dark and sporting a black mustache, having just passed through Gallup on a Greyhound, was let off the bus on Interstate 40–also a part of the former Route 66--in Sanders at the intersection of Route 666.  It was from there I hitched my first ride.  Waiting for that ride down that long desert road, there I stood with all my possessions and provisions, most of which were contained in a backpack strapped onto my shoulders and the rest, clutched in my hand, were in my old black-and-red DeWitt Clinton High School book bag.  It turns out that the same Bernard Herrmann who took the trip with Lucille Fletcher, and wrote the score to The Hitchhiker, began his formal music education in 1927 as a student at the same DeWitt Clinton High School from which I had recently graduated.

I have a rendezvous with Life,
When Spring's first heralds hum.
Sure some would cry it's better far
To crown their days with sleep
Than face the road, the wind and rain,
To heed the calling deep.
Though wet nor blow nor space I fear,
Yet fear I deeply, too,
Lest Death should meet and claim me ere
I keep Life's rendezvous.
–I Have a Rendezvous with Life, Countee Cullen
[The first published poem of Countee Cullen (1903-1946); originally appeared in 1921 in The Magpie (1921), the literary magazine of DeWitt Clinton High School, from which Cullen gradauted-- as did Bernard Hermann, and as did I.] 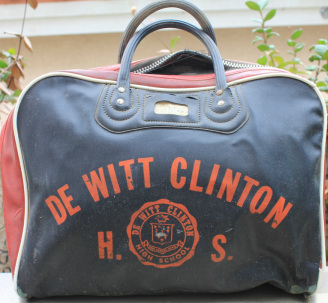 [Drawn torso of nude woman’s back a la Picasso, but a tad more explicit in crotch]

The Blue Birds of Happine$s

I fucked your wife last night

On pole down ramp:

John French(?)
From NC TJ
Back to Winslow

Have Faith
[written inside a drawn cross]

Esther Rodriguez
I love U 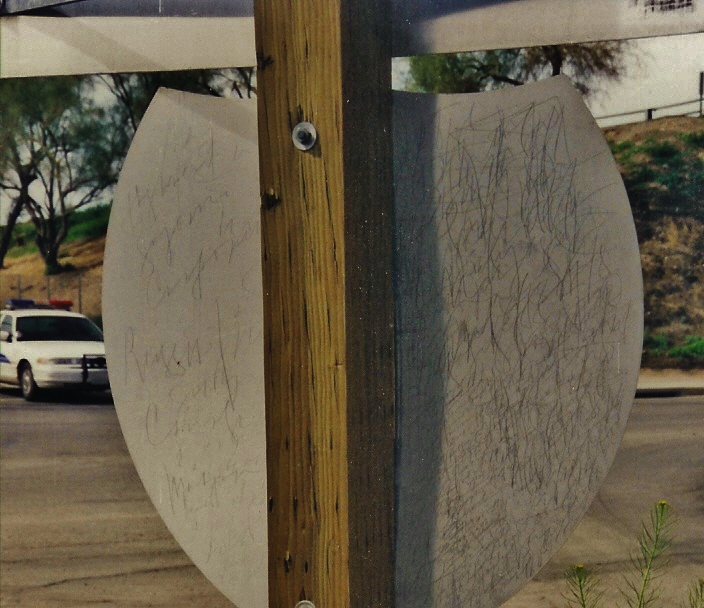